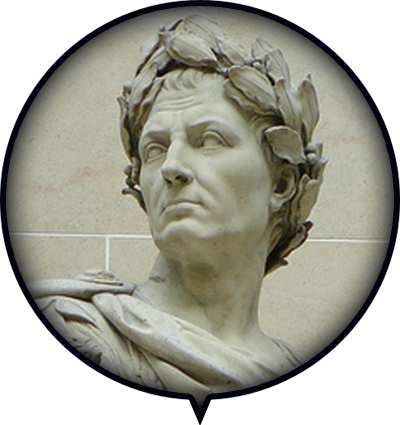 Julius Caesar was a Roman politician and general. He was able to secure power through political alliances and successful military campaigns. He created the First Triumvirate to ally himself with Pompey and Marcus Licinius Crassus. As governor he headed successful military campaigns through Gaul. Caesar later started a civil war to seize power from the Roman Senate and became the dictator. His assassination led to the events of his adopted son, Augustus, becoming the first emperor of the Roman Empire.

Caesar was the son of a Roman senator of the same name, Gaius Julius Caesar, and his mother was Aurelia Cotta. He was born into an aristocratic family of the patrician class in Rome, which had political influence in the early 1st century BCE.

At age 16 Caesar becomes the head of his family after his father dies. This came at a time of great political turmoil in Rome that was just coming off a civil war between Caesar's uncle, Gaius Marius, and his rival Lucius Cornelius Sulla. Gaius Marius was a member of the populares, a faction that favored the less powerful nobles and citizens. Sulla was the figure head of the optimates, a conservative faction that represented the power of the Senate and the aristocrats.

Julius Caesar is married to Cornelia, daughter of Lucius Cornelius Cinna an ally of his uncle Marius. This effectively aligns Caesar with the populares party. At this time the populares under Cinna held the power in Rome, while the leader of the opposition, Sulla, was commanding the First Mithridatic War for Rome.

On his return from the Mithridatic War, Sulla bloodily seizes Rome from the opposition that was in power while he was away. Caesar, being the nephew and son in law of his biggest rivals, was in great danger and went into hiding in the countryside. Sulla began political purges of the opposition that resulted in many executions and exiles. With the help of his mother's family and other political ties they were able to get his execution pardoned. Sulla demanded that Caesar divorce his wife, but he refused. Instead, his wife's dowry and his titles and inheritance were taken away. This left Caesar almost powerless.

To distance himself from Rome and Sulla, Julius joins the army and begins his service under Marcus Minucius Thermus in the Roman province of Asia.

Julius takes a role in the Siege of Mytilene, a city on the island of Lesbos. Mytilene was revolting against Rome and was suspected of aiding pirates in the area. Caesar is awarded the Civic Crown (oak leaf crown) for saving lives during the battle. The siege was a decisive win for Rome.

Julius, now a part of the general's staff, was sent to Bithynia as an envoy to obtain the assistance of King Nicomedes's fleet. Caesar was successful in his task. Rumors were started that he had an affair with king Nicomedes IV during his visits. However, the gossip was denied by Julius.

Caesar serves under Servilius Isauricus in the Roman province Cilicia. Servilius was the general in charge of clearing out pirates in the Cilicia area.

With the death Sulla, Caesar was compelled to move back to Rome. Having little money at the time, Julius moves into a lower-class neighborhood(Subura).

Caesar begins his political career as an orator and legal advocate. He gains a reputation of being an excellent public speaker and uses his skill to prosecute rival politicians for corruption. Julius was prosecutor in a high profile extortion case against Gnaeus Cornelius Dolabella, a former consul and governor.

Caesar leaves Rome to travel to Rhodes. His intent is to study rhetoric under Apollonius Molon, one on the most famous orators of his time. But Julius is seized by Cilician pirates during his voyage and held for ransom. Julius is held captive for approximately 40 days.

75 BCE - Caesar's Revenge on the Pirates

Once Caesar's followers arrived back with the ransom money and Julius set free, he quickly rallied a small fleet and went back to the island of his captors. The pirates were apprehended and Julius sent them to the prison in Pergamon. Caesar met with the governor of the Asia province to see his prisoners executed. The governor wanted the prisoners sold as slaves, so instead Julius had them crucified on his own orders.

Caesar continues on to Rhodes and studies under the famous orator Apollonius Molon.

Mithridates VI of Pontus initiates the Third Mithridatic War. Caesar, with his own resources, put together a small army. He used his army to help defend towns against attack from Mithridatic forces along the coast.

73 BCE - Joins the College of Pontiffs

For Caesar's efforts during the war, he was elected to the College of Pontiffs, which is an honorary position in the state religion. At the time Julius was still in Asia Minor.

Once back at Rome, Caesar was able to gain an elected position as a military tribune. This was one of the first steps to progress into higher public offices in Rome.

Julius is elected quaestor(financial overseer) for Hispania Ulterior province. His term was to begin in 69 BCE. This position would allow Caesar membership to the Senate.

Caesar's aunt Julia, widow of Gaius Marius, passes away. Caesar gives a funeral speech that praises his aunt and his heritage, including his deceased uncle, Marius. Also, on the same year, Julius loses his wife Cornelia during childbirth. At his wife's eulogy, he gives praise to her and her deceased father Lucius Cornelius Cinna. Cornelia had been his wife for nearly 15 years and bore him a daughter, Julia Caesaris.

In his role as financial overseer in Hispania Ulterior, he serves under Antistius Vetus.

After Caesar serves as quaestor, he returns to Rome and marries his second wife Pompeia. She is the granddaughter of Lucius Cornelius Sulla, a former political enemy of Caesar's family.

Caesar volunteered to be the curator of the Appian Way, one of the most important roads in Rome. This was the main route for soldiers and citizens coming or going from Rome to the main eastern port in Brindisi. This gave Julius experience with engineering, brought him closer ties to other parts of Rome, and gave more popularity by maintaining this important route. A lot of the maintenance was done at his own expense, and Julius had amassed considerable debts at the time.

Caesar is elected to serve as aedile. This office was responsible for the upkeep of public buildings and to regulate public festivals. The position of aedile allowed younger politicians to gain favor by coordinating public events, such as festivals and gladiatorial contests. Julius spent a large amount of borrowed money from Crassus in order to overshadow his colleague, Marcus Calpurnius Bibulus.

Caesar wins the election to become the Pontifex Maximus, which is head priest of the state religion. There were accusations of bribery on all parties involved in the election, but Julius came out the victor. Becoming the head priest made it harder for political opponents to attack him.

A plot to forcibly overthrow the republic was discovered by Cicero. It is referred to as the Catiline Conspiracy, named after the lead conspirator Catiline. Caesar was accused of being involved in the plot, but was legally cleared of any wrongdoing. Julius did argued against the death penalty for the conspirators that were arrested, which also raised suspicions.

Even though a controversial figure, Caesar was very popular with the people of Rome. He was elected to the office of praetor.

During Caesar's praetorship he still held the position of the head priest(Pontifex Maximus) of the state religion. There was a scandal during the Bona Dea festival, which was being hosted by his wife, Pompeia. Males were forbidden to attend the Bona Dea festival. A young nobleman, Publius Clodius Pulcher, managed to infiltrate the ceremony, but was caught. There were accusations that Julius was somehow involved in the sacrilege, so in order to quell suspicions he divorced his wife.

Thus far Julius had spent his way up the political ladder with bribes and expensive festivals. Julius was elected to be propraetor(governor) of Hispania Ulterior. But before he could leave for Spain, there was a matter of the unsettled debt that he had amassed. He turned to Crassus who payed off some of Caesar's debt for political favors. Julius left Rome before his praetorship ended to avoid prosecution of his debt as a private citizen.

During Caesar's term as governor there was civil unrest with the Celtic tribes in the northwestern region of Hispania. Julius used this as a pretext to invade towns along the west coast. Julius ravaged the Gallaeci and Lusitanian settlements, taking with him plunders of war. He acquired enough loot to pay off his debt and reward his troops generously. His soldiers proclaimed him imperator, which was a prestigious honor.

As governor Caesar was able to make reforms that eased the tension between debtors and creditors. These reforms let debtors pay down their loans with a percentage of their yearly income, so debtors would not lose everything and creditors could still collect money.

Caesar returned from his governorship and had been officially granted the title of imperator. This entitled Julius to a triumph, which was one of the most extravagant honors a Roman military leader could obtain. At the same time the elections for consul, the highest office in Rome, were beginning, and Caesar could not run for consular until he had relinquished his army. He put his case forward to the Senate to see if he could stand for office while outside of Rome, but Cato prevented it from being voted on. Because of this Julius had to forgo receiving his triumph in order to run for consulship.

Caesar allies with Pompey and Crassus to form what is called the First Triumvirate, an unofficial political alliance between the three. Pompey and Crassus were political enemies, but both had considerable power on their own. Caesar was successful in bringing them together to further their own interest. With their combined influence, Julius sought election for consul.

Julius wins the consulship for the 59 BC term.

Caesar's political alliance is sealed with the marriage of Julia, his only legitimate daughter, to Pompey.