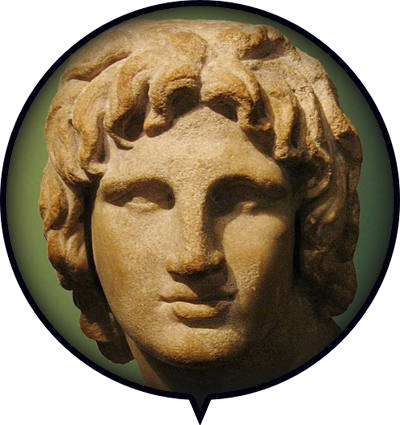 Alexander was the King of Macedon, a state in northern ancient Greece. Born in Pella in 356 BC, Alexander was tutored by Aristotle until the age of 16. By the age of thirty, he had created one of the largest empires of the ancient world, stretching from the Ionian Sea to the Himalayas.

Alexander is born in Pella, the capital of the ancient empire of Macedonia. He was the son of King Phillip II of Macedon and Phillip's forth wife Olympias, a Greek princess of Epirus. At this time Phillip was warring with the Athenians in the Chalkidiki peninsula, and Macedonia was becoming a rising power.

Around the age of thirteen Alexander's father, Phillip, invited Aristotle to oversee his tutelage. The Temple of the Nymphs at Mieza was provided as a boarding school where Alexander and other children of noble birth learned subjects such as medicine, philosophy, morals, religion, logic, and art.

At age sixteen Alexander left the school at Mieza to take the role of regent while Philip was away fighting Byzantion.

In Philip's absence the Thracian's of Maedi started to revolt against Macedonia. Alexander responded by driving them out of their lands and recolonizing with Greeks. There he founded a city named Alexandropolis.

The Amfissians were illegally cultivating lands that belonged to Delphi. This led the Amphictyonic League to declare a sacred war on Amfissa and appointed Philip to lead their effort. Philip took this as an oppurtunity to invade Greece under this pretext. His army met up with Alexander to head South into Greek territory.

Philip's army enters Elateia to establish a base in Greece. From this location the Macedonian forces were a few days of marching from Athens and Thebes to the East and Amfissa to the West.

King Philip tricks the mercenary forces at Amphissa by faking a withdraw of a nearby city to lower their guard. Then he takes a night march through Gravia Pass to take Amphissa and force a surrender.

Philip and Alexander return to Elateia. Philip then sends a offering of peace to Athens and Thebes that is rejected by influence of Demosthenes.

338 BCE - Before the Battle of Chaeronea

The Greek forces pulled back from Parapotamii, near South of Elateia, to prevent an attempted pincer movement from Philip. They retreated to a plain just North of the town Chaeronea which set the battlefield. The Greek forces mainly consisting of Athenians and Thebans numbered around 36,000 infantry and 2,000 cavalry. The Macedonian army heads south on the main road to Charonea with roughly 30,000 infantry and 2,000 cavalry.

The Greeks were defeated and routed. They suffered an estimated 2,000 causalities and 4,000 were taken prisoner. This battle resulted in Philip now being able to advance through Greece unopposed and effectively ending the war. Supposedly The Lion of Chaeronea was erected as a monument to the Sacred Band of Thebes that were defeated in this battle.

After the battle of Chaeronea Philip and Alexander marched freely through the remainder of Greece. Philip spent months after the battle settling disputes with opposing Greek states, mostly peacefully, the only resistance coming from Sparta. Philip was able to establish the League of Corinth which included all Greek states except for Sparta. In turn the league named Philip the Supreme Commander. He shortly declared his intentions of invading Persia with his new military force.

Once back at Pella, Philip took a new wife and divorced Alexander's mother, Olympias. This led to tension between Alexander and his father, also possibly jeopardizing his right to the Macedonia throne. This led to a quarrel at a celebration of Philip's new marriage. As a result Olympias and Alexander both left Pella.

Alexander and his mother leave from Macedonia out of fear of retaliation from Philip. They go to Dodona in Eprius, the Molossian capital where Olympias's brother, Alexander I of Epirus, is king.

Alexander leaves his mother in Epirus, and seeks asylum with the King in Illyria. He is allowed to stay and is treated as their guest. But months later Philip's and Alexander's quarrel is pacified with the help of a family friend, Demaratus. Thus Alexander returns to Macedon

During the wedding of his sister, Cleopatra of Macedon, to Alexander I of Epirus, Philip was murdered by his bodygaurd, Pausanias of Orestis. Shortly after Alexander is declared king by the Macedon army and nobles. He is 20 years old at the time of his accession to the throne.

Almost immediately after seizing power Alexander and his mother Olympias begin to systematically kill any possible threats that could have claim to the throne. This included Alexander's cousin Amyntas IV and a few other Macedonian princes.

Philip's death caused many of the previously pacified territories to revolt, seeing an opportunity to regain some power. Alexander reacted to the news by gathering cavalry force and headed south. His first stop was in Thessaly where he managed a surrender and acquired additional cavalry from them.

Alexander returned to Corinth to face the League of Corinth. They agreed to peace and declared him the leader(Hegemon), the same position as his father, Philip. This secured Greece and allowed him to focus on the frontiers of his borders.

There was an ever pressing threat of a Thracian uprising after the death of Philip. Alexander took a Macedonian force to deal with any revolts. From Pella he went to Amphipolis to Philippi. Alexander then crossed the Rhodope mountains, to the foothills of Mount Haemus (modern day Balkans) where the first major Thracian engagement took place.

The Thracians made their first stand on the Southern slopes of Mount Haemos (Balkan Mountains). When Alexander came to the pass, the barbarians had made make shift fortifications out of their wagons and chariots. The Thracians tried breaking the phalanx formations by rolling the carts down the slopes then engaging when they were scattered. This method proved ineffective, and the barbarians were routed. An estimated 1,500 combatants were slain, the rest fled into the woods and ravines.

Alexander and his forces pass the mountains safely, and head through the Northern slopes into Triballi lands. He then crosses the Lyginus River and starts the march to the Danube, but finds that the Triballians were trying to march around and sieze the mountain passes to the South. Alexander heads back to intercept them to begin the Battle at the Lyginus.

When Alexander caught up with the Triballians they retreated to woody areas near the river. To draw them out Alexander led the phalanx. This caused the Thracians to advance and try to take Alexander, but it was a ploy so that the Macedonian cavalry could flank them once out in the open. There was roughly 3,000 slain Triballi and 50 Macedonians.

Alexander continued a three day march up to the Danube somewhere south of the island Peuce in the Danube Delta. This is where King Syrmus and his people, the Thracian Triballi, had fled after their earlier defeats. Alexander met with a fleet of boats with supplies that he had arranged to be sent from Byzantium.

With the boats from Byzantium Alexander attempted to land on Peuce, but found the natural defenses from island and the preparations from Syrmus's Thracians formidable. Alexander decided to withdraw from taking the island and instead turned his focus on the Getae that were massing forces on the other side of the river.

The Getae on the other side of the Danube had amassed approximately 4,000 horsemen and 10,000 infantry to thwart any attempt to cross the river. Alexander surprises the Getae by crossing roughly 6,000 troops across the river using improvised rafts and small boats confiscated from the locals. This caught the Getae unprepared and they fled after the first skirmish. This left the Macedonians free to plunder then raze the Getae city.

After the defeat of the Getae and Triballians, King Syrmus and other Thracian tribes sent ambassadors to Alexander to plea for peace. Alexander, wanting to secure the Danube River, accepted the peace offering.

During the campaign of the Danube, Alexander received information of a revolt by the Illyrians led by Cleitus. He had to quickly get his troops to Pelium which was considered to be the most strategic pass between Macedonia and Illyria. While marching to Pelium Alexander received help from the Agrianians, to protect his flanks from other barbarians that would slow his progress.

Once Alexander arrived he found that Pelium and the surrounding highlands had already been siezed by Cleitus's Illyrians. They were awaiting reinforcements from another Illyrian king, Glaucias.

Alexander makes his way into Asia over the Hellespont. Using the Macedonia galley fleet of approximately 120 ships. They transport around 48,100 soldiers, and 6,100 horses across the strait.

323 BCE - Death of Alexander the Great

Alexander died in the palace of Nebuchadnezzar II, in Babylon, at age 32.